15 november 2014. A growing number of banks are increasing their innovation budgets, as we saw previously, and they already know where their investment is going. But almost a third (31%) recognize that they do not monitor results afterwards.

Along with financial transactions and services linked to mobile devices, as well as opportunities offered by big data, one of the favorite investments for banking firms is the implementation of social channels for active listening and gamification mechanisms. In fact, 94% of the sector considers the sum of the two to be “highly important”. 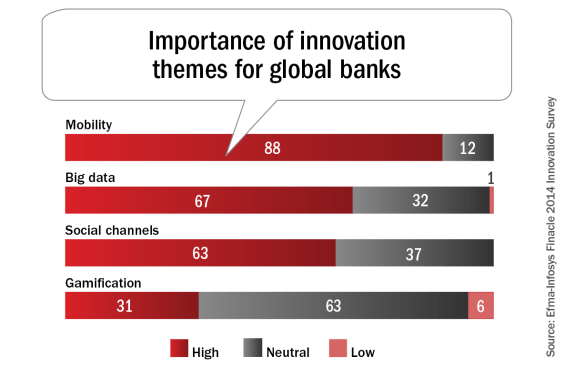 In the case of social networks, banking firms generally see them as a response mechanism for the demands of a new kind of digital consumer, with more channels than ever to find information and be active. They want to contribute their ideas, participate in the debate and be heard.

In that sense, ideas social networks can cover this need better than conventional social networks, because they have higher participation rates and include motivational mechanisms (gamification) that increase brand/client engagement.

But they can also help internally, coordinating and opening the company’s innovation strategy to all areas of the company.

According to Efma and Infosys, at least 63% of banks engage several departments, with best results obtained when there is more participation, fluent communication and transparency between all the areas involved: these are aspects that make up the DNA of an ideas social network. But above all, the report highlights idea generation as the most effective mechanism among the different existing innovation practices.

So much so that, according to the report, banks that do not use this strategy (over 40% of companies in the sector) are seen as expressing a sign of weakness and lack of competitiveness in the global game board, with the digital transformation creating new rules of the game that require new models from companies. As the study explains, it is important for banks to use collaborative processes, internal collective efforts and external investments and alliances to develop new services that add value to their offer.

You can access the complete Efme and Infosys report here. You can also read the first and the second posts of the series on innovation in banking.