30 october 2014. The banking sector currently lies at a crossroads between innovating and being left out of the digital transformation game. The sixth annual report on “Innovation in Retail Banking”prepared by financial institution Efma and consulting firm Infosys reveals that the banking sector is rather suspicious of the eruption of technological giants in its sphere of activity, such as Apple, Google and Facebook.

The world of finance is not unconnected to the technological revolution that, like an earthquake, has affected all economic sectors. The rise of banking transactions through mobile devicesillustrates the importance of innovation in a sector with new types of clients, new needs… and new operators.

Within this new paradigm, banking firms can choose between leading the race and being a follower. It is not by chance that 84% of banks have increased their innovation budget this year, while only 13% did so in 2009. In just five years, the banking sector has understood that the rules of the game have changed, and more and more banking firms are turning to the expertise of technology companies and, increasingly, to young and dynamic startups, in order to avoid being stuck in an old business model, or to mitigate the effects of the emergence of companies from other sectors.

In line with this, the report points to how 80% of the innovation budget in large firms of the banking sector is used to embrace external resources in order to devise innovation strategiesor provide tools that promote innovation within the company, such as ideas social networks like Innovation Agora. 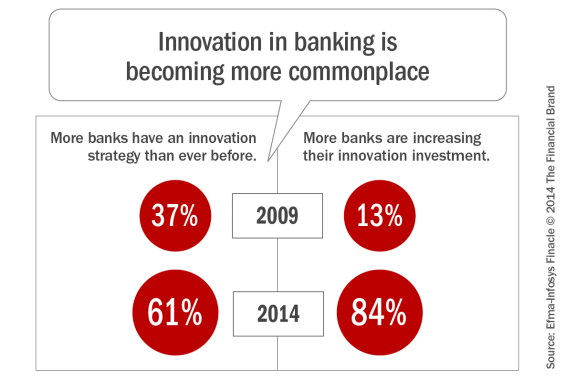 Furthermore, within the new digital ecosystem banking firms from emerging economies seem to count with an important advantage. According to Efmaand Infosys, several banking firms from Poland, India or Turkey have made the most of their youth, positioning themselves among the most dynamic and innovative firms in the sector thanks to the rapid adoption of new technologies and their lack of outmoded tics.

On the other end of the spectrum, banking in North America and the old continent seems to be more resistant to change. Less than half of their companies are looking to lead innovation in their sector. And 38% are content with being “fast followers”in a frenetic race where those who dare the least are risking not being able to receive the baton.

You can view the complete Efma and Infosys report here.