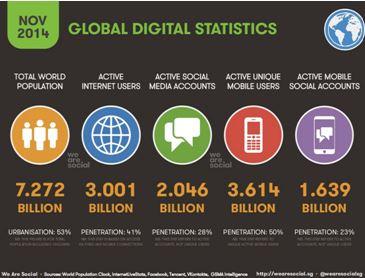 I recently read the report by @wearesocialsg with updated figures for social media in November, showing the unique population of mobile phones is 3.614 Billion, that’s 50% of the world population and surpasses the number of internet users (3.001 Billion), with 41.3% of the population connected and active, of which 2.046 Billion are active in social media. But more important still, there are more mobile phones than people, thanks to their continuous evolution, connectivity, functional and informative innovation, number of educational and recreational Apps, they will become the most used and personal device of the future. Although the fact that many people own more than one phone (I certainly know many that do) means growth will not be maintained at such a rate. 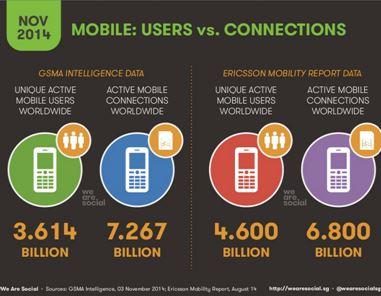 Some of the most surprising conclusions have come from November’s updated information on Facebook, WhatsApp and Twitter. In Facebook’s case because the number of users is now close to the population of the two most populated countries in the world, but WhatsApp is following closely behind. 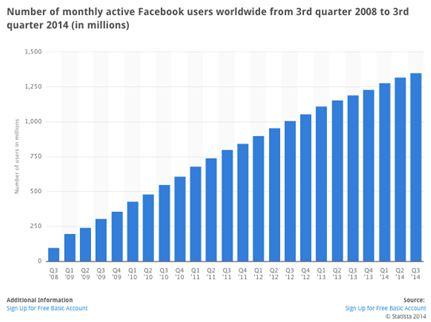 Facebook is on its way to becoming the largest “country” in the world. It already has 1.350 Billion users, a 13.5% increase compared to the previous year and only 16 Million short of China’s updated population, at 1.366 Billion. It is still comparatively the second population in the world after China and who knows how long it will take for Facebook to overtake China. At this rate, that could happen in early 2015 or even December 2014 (the growth rate is 10-13M active users every month), having already reached India’s population of 1.263 Billion in December 2014. And Chinese networks QQ and Qzone are 4th and 5th in the world. 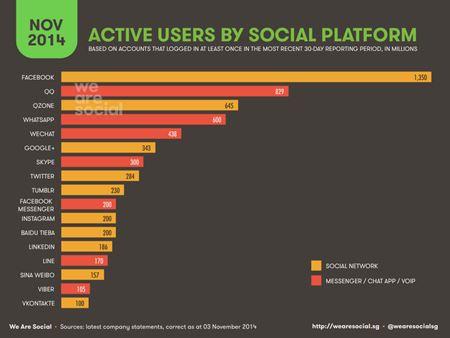 The fact is that in many countries the information the census gives on the gender, name, and date of birth of inhabitants is not available for a significant percentage of the population (something I found out in my recent trip to India where many women in rural areas did not know their age, other than by calculating approximately from the start of their menstruation), and information in social media is more accurate and complete for a majority of users, with real information on their behavior, tastes, friendships, professional circles, preferred brands, feelings, habits… in short, their more human side.

WhatsApp is the sixth largest country in the world, having now reached 600 Million users as of August 2014, but an update published in November by Facebook with user data in Asia indicated 468M in that region only. If we compare this to the latest updated information on populations in Wikipedia, it would be, including Facebook, the world’s fourth country. 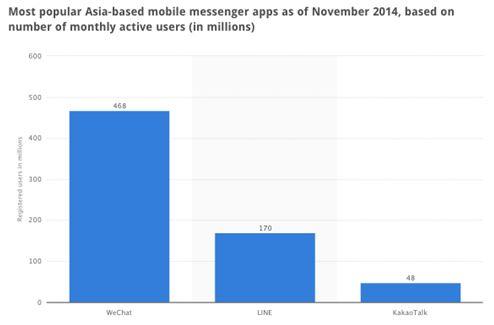 WeChat would be 7th largest country in the world, and Google the 8th, still larger than the USA, in 9th place, followed by Brazil in 10th place (and not 4th) in terms of population. 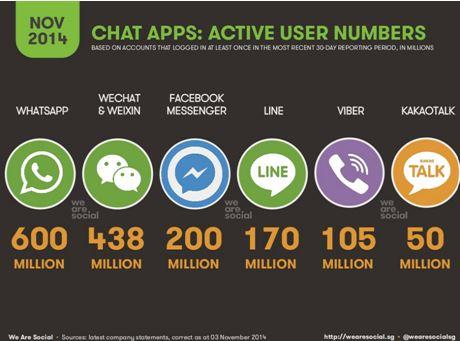 So where is innovation? Innovation lies in knowing how to listen to users, being in a permanent beta state, buying the ideas of others, auto-cannibalizing and reinventing ourselves to survive and create the new future.

Listen to users: they are the ones who took charge of how they wanted to use their mobile phones. They chose to use their phones to send text messages and not only to talk, surprising all Telecom companies, and later decided they did not want to pay for text messages, and wanted to have their own chat networks, defined by themselves within their circle of friends, where they could share photos and short videos without having to pay, because we are in a new society where images–not only words–are a form of personal expression. And there we have WhatsApp and WeChat, with Facebook moving fast to buy this new phenomenon that had taken it by surprise in its origin.

Listen to those users who keep Google in a permanent beta state, constantly experimenting and leaving their employees 25% of their time during one day of the week to think and build new ideas, maps, cars without driver, augmented reality glasses, in search for new ways to improve their advertising by buying DoubleClick and incorporating videos to their offer after buying YouTube so that they wouldn’t be left out, when they used to say the mobile phone would never be used to watch videos…and reinventing spaces like the cloud where all our stuff can fit, data and BigData, which is here to stay, predicting epidemics days before the epidemiology experts from the CDC (the old Communicable Diseases Center, now the Centre for Disease Control and Prevention cdc.gov in Atlanta) say anything about them; and Google team does it with their algorithms and by listening to what the internet and browsers say.

And listen to the Facebook users who started being just social, using this media simply like a university yearbook, and made it become something far greater, expanding circles of close friends to become professional circles, circles of acquaintances with weaker links, using it to interact with brands, share their activities, travels and photos of any experience. Facebook has become one of the most active photo sites, which is why Facebook recently bought Instagram, so that they wouldn’t be left out of such an innovative proposal. The same goes for Amazon, who went shopping for Zappos, its shoe-selling competitors with an excellent culture of quality service, as well as Kiva robots and BuyVip in Spain.

Peter Drucker wrote something about having success success: “There is a difference between doing the next thing right and doing the next right thing”.

The beginning of Twitter with only 140 characters was also surprising, as it went on to become a source of real-time information, news, activities, meetups, flashmobs, and or smartmobs that are changing the world… today it is one of the most active sites for customer services for some brands, where their reputation is at stake if they don’t provide quick answers to questions and claims from users. All of these innovations have had to be given their space by social media, companies and institutions in order to maintain this rate of growth and satisfaction. They are social media brands in a constant beta state, Twitter adapting day by day to new demands such as the possibility of uploading videos, creating auto-cannibalizing products by giving in to things like URL shorteners to allow more text than the 140 characters. You need to accept demands or others will be the ones to cannibalize you.

There is a constant emergence of market niches with new proposals, identified and created by users and entrepreneurs that are willing to create something if they can’t find it, the DIY (“do it yourself”) generation with Pinterest, Instagram, Spotify, tripadvisor, eltenedor, Uber, AirB&B, all of which are not connected to a specific age group, but to an attitude, with a DNA for #innovation in life and society, which changes at enormous speed, reinventing themselves to survive and create the new future.